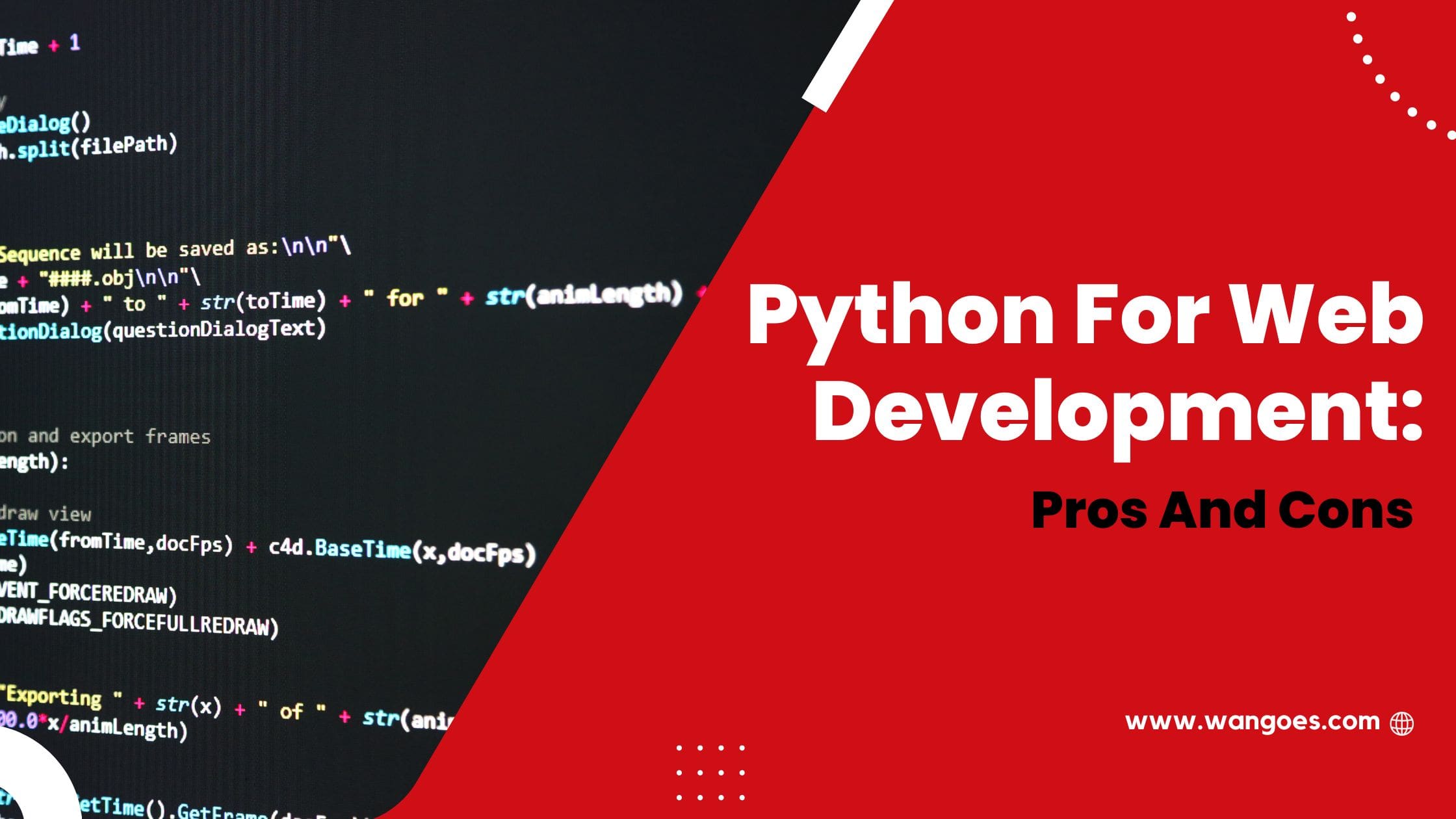 This post has highlighted the pros and cons of Python for website development that will educate you and help you to take the right decision for your website.

First, let’s start with a brief understanding of Python for website development.

What Is Python For Web Development?

The name python was derived from Monty Python. Python is considered the most popular coding language in the world. In the late ’80s, this popular language was first conceptualized and influenced by the Modula-3 and ABC languages.

With the rising technological advancement, many developments have been seen in this language.

It has been identified that the Python language is suitable for different complex and simple kinds of web projects.

Presently, this popular language is broadly used in various spheres like transportation, finance, travel, healthcare, and others for software testing and web development, generation, and scripting.

The demand for the python language is growing among the big companies because it offers significant benefits. However, Python for web development has many advantages, but you can also find some pitfalls.

What Are The Pros Of Using Python For Web Development?

In general, Python comes in handy with the strong integration with Java, C, and C++ for application scripting. Initially, Python is designed to be embeddable, which is beneficial for customizing large apps and creating extensions for them. Moreover, many professionals or specialists choose Python for website development because of its test automation. Python gives a simple learning curve that is good for those with clear syntax, strong community, and readability. Additionally, this popular language has a framework of easy-to-use unit testing, which is beneficial for mobile application development.

It has been identified that Python is easily accessible to users because of its open-source license. Moreover, this popular language facilitates unrestricted modifications and redistribution. As a result, developers can easily and freely contribute to its improvement by using the language.

If you are looking for a simple and fast process, creating Python prototypes can be the best option. The programming language agility allows for quick development and easy code refactoring of the initial prototype into the finalization of the product.

Python is considered to be useful for its portability and interactivity as it has decent capabilities for fast prototyping and dynamic semantics. If you are using a different coding language or any other app, then it can help you to be embedded. Likely, you can be able to extend the core vocabulary of Python by fixing the new modules. There is a diverse range of components that can be connected through this.

Python has a simple syntax that significantly speeds up the process, which is considered to be beneficial for server-side scripting. However, you can execute the program algorithm based on user actions as the code involves connections and functional modules. Usually, the graphical user interface is supported by Python, which is mostly needed in website development.

6. Use of numeric and scientific applications

Many enterprise software application developers give more preference to the python language because of its smooth integration with different traditional languages that are consequently used in enterprise development like .NET, PHP, and Java. It has been identified that Python allows considerable process control and implementation of the data formats and common protocols. Along with this, Python can be used to assemble old and new infrastructure fragments that are a typical case in complex mobile app development.

8. Use in artificial intelligence (AI) and machine learning (ML)

Nowadays, the demand for artificial intelligence (AI) and machine learning (ML) is rapidly growing. Thus, many software developers are trying to incorporate AI and ML in their web development projects. In such a case, the developers need to choose the right language to get an effective result for their project. Many experts in the machine learning department have mentioned that Python is one of the top leading languages for artificial intelligence and machine learning projects. It has been identified that Python has effective tools for visualizing results, and efficient ML packages and goes way beyond features and data analysis that is useful for this application.

9. Use of python frameworks

One of the major benefits of using Python for web development is that it can use different frameworks. These frameworks are useful to simplify the application or website development work. There are different kinds of frameworks that can be used based on your specific working project.

Python is considered to have a less-limited programming approach as compared to other coding languages like Java. It has the capacity to support a multitude of programming styles along with multiple paradigms, including object-oriented, procedural, and functional ones. If you are developing a new website or have a startup plan, then using Python can be a great language to change your approach based on your requirements. Likely, it gives you many benefits like fast development, a rich standard library, and ecosystem, and object-oriented programming (OOP) becomes easier.

As pythons do not have research contention or deadlocks, or any other confusing issues, a developer need not give more effort and efficiency to write the code and maintain asynchronous code. It has been identified that each unit of asynchronous code runs smoothly and differently, which is useful for handling different problems and situations faster.

Many factors contribute to simplifying the use of Python for website development. It includes a low entry barrier and good visualization. Here, a developer can easily read and understand the code that their fellow programmers write. This helps the developers communicate well and efficiently on the same project they are working on. Likely, the job role of the app developers becomes very easy.

What Are The Cons Of Using Python For Web Development?

While developing a web application, multiprocessing plays an integral role. Here, multiprocessing is supported by Python, but it might not be convenient or flexible as compared to any other language. However, when you are writing the code, it can create some limitations for you.

When you are creating an app for your project, you must be looking for the most experienced web developer to perform the task. As many expert programmers are working in web development by using Python and comparing it to Java, it will be really difficult for you to get the right developer for your web development project.

3. Not popular for mobile application development

While looking into the speed aspect, the python language has always been criticized. Usually, this interpreted script language uses different methods to translate code, which makes it comparatively slow. However, there are some Python benchmarks that are working very fast as compared to C and C++. The issues related to speed have been optimized and addressed, and it is considered to be one of the favorite choices of website development teams.

It has been identified that Python has some restrictions on the design as it is dynamically typed. During app runtime, it executes certain tasks, which should be finished in a statically typed language. However, Python might prevent smooth operation and stall the program when key elements are loaded in the design. Apart from these, you need to know that parallelism and concurrency are not aimed to use in Python when considering Python for web development projects. This is because the design might not meet your preference and look as sophisticated.

Python language gives data types flexibility, leading to high memory consumption. As a result, it makes it inconvenient to utilization of memory-intensive tasks.

After understanding a wide range of pros and cons of using Python for website development, you must have received clarity now. Likely, you can develop a simple and clear application through the use of python language.

Get Estimate Of Your Project